A Moment of Clarity 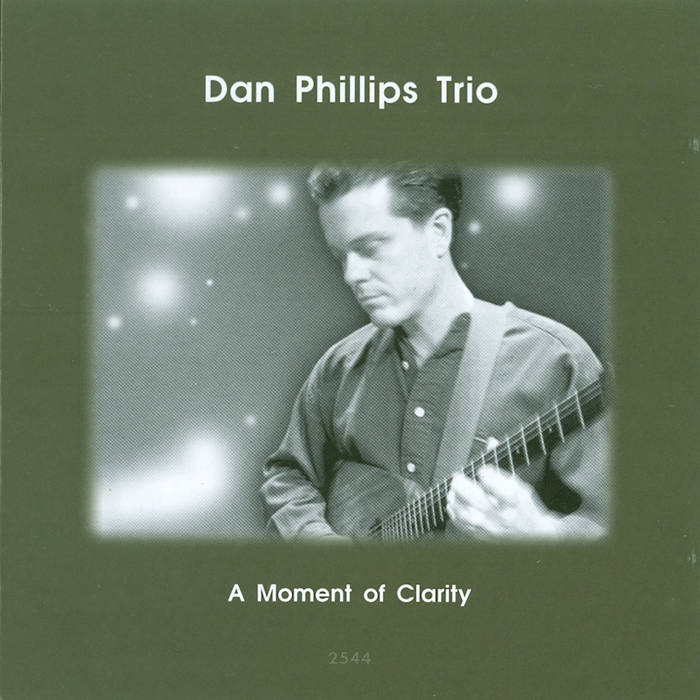 "Moment of Clarity" is the second release by the Dan Phillips Trio that features all original compositions. This release is the result of several years of working experience for Dan in Chicago with open-minded musicians . The Trio has developed an approach that allowed for improvisations that at times go in and out of forms and structures freely in the flow of the improvisation. This trio has a truly origianl sound with Krzysztof at times playing arco melodies like a cellist and Tim swinging hard and abstracting just when needed.

Dan Phillips is an American guitarist, composer educator and
bandleader who has worked professionally in New York, Chicago, Bangkok and Tokyo. His Chicago based Trio has released three original recordings “Journey in Mind”, “Moment of Clarity” and “Destination Unknown”. His Bangkok Quartet has two releases “Bangkok Edge” and “Bangkok Edge Live” he also produced an educational/ concert DVD “Jazz Guitar Basics and Beyond”. He is also the leader of the “Chicago Edge Ensemble” which just released its first album “Decaying Orbit” featuring Chicago greats Hamid Drake, Jeb Bishop and Mars Williams. He has appeared at the Montreal Jazz Festival in Canada, Copenhagen Jazz Festival in Denmark, Ashikaga City Jazz Festival in Japan,Pattaya Music Festival, Bangkok Jazz Festival, Chiang Mai Jazz Festival and Hua Hin Jazz Festivals in Thailand, and Krakow and Empty Bottle Jazz Festivals in Chicago. Dan has also presented Jazz workshops throughout Asia, Europe and The U. S. He is currently Lecturer of Guitar and Jazz Studies at Silapakorn University in Bangkok, Thailand. He completed his undergraduate studies at Berklee College of Music where he was selected to represent the college at the Montreal Jazz Festival in his senior year in the “Berklee All Star” ensemble. He completed his graduate studies at Northwestern, University. Dan has performed with jazz musicians such as Gerald Wilson, Danillo Perez, Judy Roberts, Hugo Rasmussen, Jeff Parker, John Stowell, Matt Darriau, JimBlack, Hamid Drake, Jeb Bishop, Mars Williams, Ben Street, Chris Speed, Pat Zimmerly, Mike Sarin and Ed Thigpen and many more .For more info check out www.danphillipsmusic.com www.facebook.com/danphillipsguitarist/

Tim Mulvenna has been performaing, teaching and recording for the last decaded in Chicago as well as touring North America, Europe and Asia. Tim has worked with many International artists including: Roscoe Mitchel, Ken Vandermark, Peter Brotzman, Robbie Fulks, Ritchie Cole, Fred Anderson, Lin Haliday, John Abercrombie, Tom Varner, Ellery Eskelin, Tommy Dorsey Orhestra and Bern Nix among many others. He can be heard on more than 30 recordings for labels such as Blue Note, Delmark, Atavistic and Okka-Disc.

Krzysztof Pabian hails from Europe as a classical-trained bassist. He began his music studies at the age of 8 on piano and switched to bass at age 14. Krzysztof moved to the U.S. in 1993 where he studied at Northwestern University. Krzysztof has performed with the Chicago Symphony Orchestra and the Chicago Civic Orchestra. He has also worked in an array of new music ensembles under the direction of Pierre Boulez, Daniel Baenboim, Christopher Eshenbach, Zubin Matha, Lawerence Foster, and Pinchas Zukerman. In the area of Jazz Krzysztof has performed with Danillo Perez, Judy Roberts, Max Roach, Ron Blake and the Lincoln Center Jazz Sextet. Krzysztof has toured throughout North America, Europe and Asia.

“The first impact Phillips makes is with his sense of swing and thick notes that fall from his guitar…….he opens the vista in a swell of notes that cut, roll and sweep ahead in a near torrent…..The textures weave and bob, taking flight on the wings of their imagination. Phillips….makes the experience interesting by taking a turn, breaking up a rhythm, and scattering the edifice. In the unknown lies welcome surprise.” (review of Dan Phillips Trio “A Moment of Clarity”  allaboutjazz.com 1/2005

“….thoughtful and swinging……creates a lot of intriguing colors and not afraid to go out harmonically…It is wonderful to hear music of this high caliber coming from such limited materials. Doing so much with so little is a rarity, and it requires the kind of musical intelligence of a Dan Phillips.” (review of Dan Phillips Trio “A Moment of Clarity”)  Cadence Magazine 6/2004