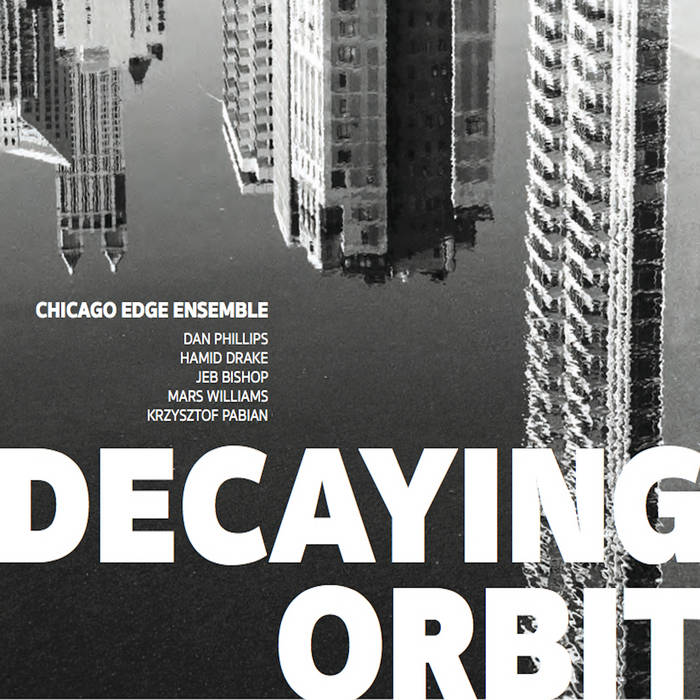 Chicago has justly earned its high esteem amongst jazz & creative music aficionados. The city that fostered the talents of the AACM, Sun Ra, Fred Anderson, and many more has been kept alive by figures such as Ken Vandermark, Dave Rempis, Michael Zerang and many more. Some of the city's brightest lights appear on the new album Chicago Edge Ensemble, led by former Chicago resident, guitarist Dan Phillips. Phillips couldn't have picked a more pure cast of musicians to capture and pay tribute to the city he loves - legends Mars Williams (saxophone), Hamid Drake (drums), Jeb Bishop (trombone), and Krysztof Pabian (bass) all contribute in making Chicago Edge Ensemble's Decaying Orbit a rather memorable disc; one ripe with the urgent music which has come to characterize the city's identity.

Although Phillips - a Berklee and Northwestern grad - has lived in Thailand as an active educator and performer in Bangkok since 2001, he grew up in Illinois and lived in NYC for 5 years working with the likes of Jim Black, Ben Street, and many more. From the mid 90s to the early 2000s he lived in Chicago where he led groups featuring local talents Jeff Parker, Chad taylor, Tim Daisy, Krzysztof Pabian, Rudresh Mahanthapa, Phil Gratteau and Larry Kohut.

But the imprint that Chicago made on Phillips was indelible and permanently shaped his playing, his composing, and his conception of and attitude towards music. When thinking of members for his nascent Chicago Edge Ensemble, the members came naturally to Phillips - he had known of Mar Williams' work with Ken Vandermark and the NRG ensemble; admired the legendary work of Hamid Drake with virtually every free jazz luminary; had been friends and casual music colleagues with Jeb Bishop for 20 years, but the two had never recorded together; and he called on his stalwart bassist Krysztof Pabian, whom he had worked with for over 20 years and on numerous previous recordings.

We can hear the city's influence on Phillips' writing immediately with the ostinato that opens Decaying Orbit on "Attitude Adjustment". The piece merges into a searching collective improvisation, where Phillips, Williams and Bishop all contrapuntally bounce lines off of one another - it's open and free, yet retains a characteristic deep sense of groove, feeling and composition. Pure Chicago. He purposefully selected these specific players who could adeptly navigate both those worlds without any hesitation or compromise.

Other tracks like "Bipolar Vortex" showcase a wide swath of what this group is capable of - beginning with a gorgeous, slow paced melody, sustained by an arco drone of Pabian's, which later erupts with a virtuosic, powerful solo by Williams. "Decaying Orbit" likewise begins with a magisterial and lush band sound, which segues into another memorable groove, with Drake propelling the band. Phillips and Bishop both take some of their most memorable solos on the record, and both really take the time to stretch and showcase their personalities.

"Not Here You Don't" shows the band at its most aggressive, with a memorable melody which leads into frenetic blowing, with Phillips, Bishop and Williams dense textural blanket hovering over the infectious groove of Drake and Pabian; colliding in certain moments, diverging at others; Williams' altissimo soaring, with Phillips effected guitar tone interjecting, and Bishop's quiet assertions dabbing in and out. Phillips showcases another impressive solo here, locking in with the rhythm team, and wailing over the shout chorus of saxophone and trombone.

"Splatter Pattern" showcases Bishop, Williams and Phillips and concludes with an ominous vamp which is effectively repeated numerous times, leaving a riveting, haunting impression. The album closes with "Uptown Swagger", the band's most laid-back song, and likely its grooviest - showcasing even further what this group is capable of.

With its palpable personality, rigorous but approachable compositions, and sure-footed sense of self, Chicago Edge Ensemble's Decaying Orbit not only pays homage to the city that Phillips loves, but also solidly places him on the map as a formidable instrumentalist and composer. It's a treat to hear him play with such a first rate band of some of Chicago - and the world's - greatest musicians.