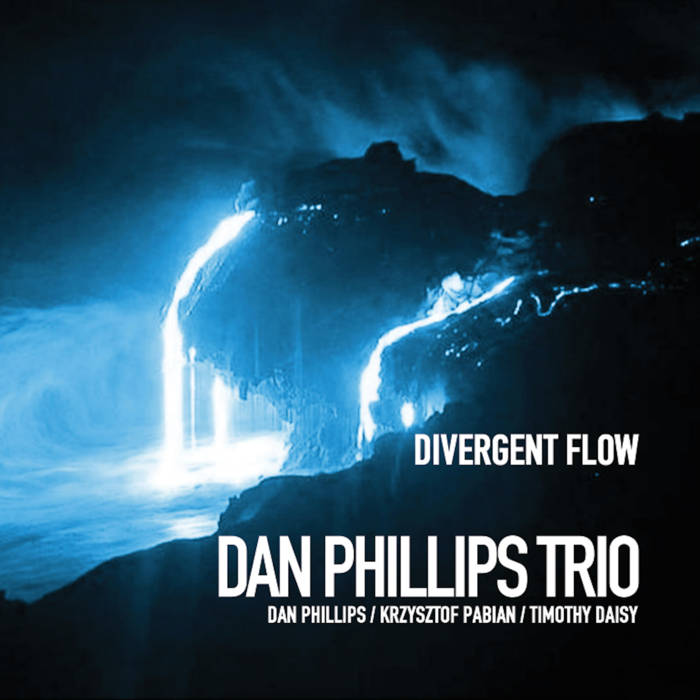 The first release from a Chicago based Trio featuring the five compositions by guitarist Dan Phillips and two group improvisations with Timothy Daisy on drums and Krzysztof Pabian on double bass.

The first release from a Chicago based trio featuring the five compositions by guitarist Dan Phillips and two group improvisations with Timothy Daisy on drums and Krzysztof Pabian on double bass.

Although this is the first release for this unique trio, Krzysztof and Dan have 20 plus year relationship and are also members of Dan’s “Chicago Edge Ensemble” which released it's first recording ”Decaying Orbit” in 2017 also featuring Hamid Drake, Mars Williams and Jeb Bishop. Dan, Tim and Krzysztof also released a Quartet album ‘Converging Tributaries” in 2017 with trombonist Jeb Bishop.

The album features Dan Phillips’ unique compositional style as well as extended group improvisations of spontaneous compositions, which showcase the musicality and creativity of all the members.

The city that fostered the talents of the AACM, Sun Ra, Fred Anderson, and many more has been kept alive by figures such as Ken Vandermark, Dave Rempis, Michael Zerang, Tortoise and many more. Some of the city’s finest appear on this release, led by guitarist Dan Phillips.

Although Phillips – a Berklee and Northwestern graduate – has lived and worked in Thailand off and on since 2001 where he works as a Jazz Educator and performer in the region, he grew up in Illinois and lived in NYC for 5 years working with the likes of Jim Black, Ben Street, Chris Speed, Matt Darriau and many more. During this time abroad he has regularly returned home to his beloved Chicago to record and perform with his favorite musicians. From the mid 90s to the early 2000’s he lived in Chicago where he le and performed with groups featuring local talents Jeff Parker, Chad Taylor, Tim Daisy, Jeb Bishop, Hamid Drake, Dave Rempis, Michael Zerang, Avreeyl Ra, Josh Berman, Mars Williams, Rudresh Mahanthapa, Jim Baker, Jason Stein and Tatsu Aoki.

Dan Phillips Trio featuring Tim Daisy and Krzysztof Pabian - Divergent Flow
The album begins with the title track “Divergent Flow”, which begins with a composed harmonic line played melodically. This harmonic and melodic material is used as starting point for a group improvisation that leads to and outro melody played by arco bass. The concept of composed melodic material used as an improvisational vehicle is a common theme for the Trio. This is followed by “The Unravelling”, which features a simple melodic theme that is the basis for a rubato improvisation by the group. “Fixed Agenda” is an ostinato that is the jumping off point for Dan and the group to soar. “Extricated From” and Latitude” are free group improvisations that showcase this Trios improvisational approach that is open, democratic and compositional all at the same time in its approach. “Dip” features minimalist written material with open solo sections for each musician to improvise and then come together for a group improvisation. “Spin Cycle” features a composed melody play over a churning free rhythm by Tim and Krzysztof that gravitates toward a group concept before returning to the melody for the outro.

More about the musicians:

Dan Phillips is an American guitarist, composer educator and band leader who has worked professionally in New York, Chicago, Bangkok and Tokyo. His Chicago based Trio has released three original recordings “Journey in Mind”, “Moment of Clarity” and “Destination Unknown”. His Bangkok Quartet has two releases “Bangkok Edge” and “Bangkok Edge Live” he also produced an educational/ concert DVD “Jazz Guitar Basics and Beyond”. He is also the leader of the “Chicago Edge Ensemble” which just released its first album “Decaying Orbit” featuring Chicago greats Hamid Drake, Jeb Bishop and Mars Williams. He has appeared at the Montreal Jazz Festival in Canada, Copenhagen Jazz Festival in Denmark, Ashikaga City Jazz Festival in Japan, Pattaya Music Festival, Bangkok Jazz Festival, Chiang Mai Jazz Festival and Hua Hin Jazz Festivals in Thailand, and All Souls and Empty Bottle Jazz Festivals in Chicago. Dan has also presented Jazz workshops throughout Asia, Europe and The U. S. He is currently Lecturer of Guitar and Jazz Studies at Silapakorn University in Bangkok, Thailand. He completed his undergraduate studies at Berklee College of Music where he was selected to represent the college at the Montreal Jazz Festival in his senior year in the “Berklee All Star” ensemble. He completed his graduate studies at Northwestern, University. Dan has performed with jazz musicians such as Gerald Wilson, Danilo Pérez, Judy Roberts, Hugo Rasmussen, Jeff Parker, John Stowell, Matt Darriau, JimBlack, Hamid Drake, Jeb Bishop, Mars Williams, Ben Street, Chris Speed, Pat Zimmerly, Mike Sarin and Ed Thigpen and many more.

Krzysztof Pabian hails from Europe as a classical-trained bassist. He began his music studies at the age of 8 on accordion and piano and switched to bass at age 14. Krzysztof moved to the U.S. in 1993 where he studied at Northwestern University to graduate with two Masters degrees in jazz and classical double bass performance. Krzysztof has performed with the Chicago Symphony Orchestra and the Chicago Civic Orchestra and worked in an array of ensembles under the direction of Pierre Boulez, Daniel Barenboim, Christopher Eshenbach, Zubin Mehta, George Solti, Lawrence Foster, Pinchas Zukerman and Krzysztof Penderecki to name a few. In the area of jazz Krzysztof has performed with Danilo Pérez, Judy Roberts, Eddie Henderson, Max Roach, Ron Blake, Hamid Drake, Mars Williams, Dave Rempis, Michael Zerang, Jim Baker, Jarek Smietana and the Lincoln Center Jazz Sextet to name the few. Krzysztof has toured throughout North America and Europe with various groups and configurations.

For more info check out www.pabian.com

Tim Daisy was born on July 15th, 1976, in Waukegan, Illinois, and began playing the drums at age 11. Soon he was involved in a rock band with his brother, playing shows around the northern Illinois and the Southeastern Wisconsin area. At age 17 a friend gave him a copy of John Coltrane’s “Giant Steps,” which had a profound impact on him and began his fascination with improvised music. Tim began formal lessons with percussionist Joe Varhula at the College of Lake County in Grayslake, Illinois, from 1995-1996, and moved to Chicago in 1997, quickly becoming involved with the city’s vibrant improvised music scene. In 1998, he formed Triage with Dave Rempis and bassist Gordon Lewis (who was replaced by Jason Ajemian in 2000). Also at this time, he became involved in the “58 Group,” a modern dance ensemble led by choreographer Ginger Farley, with musical direction by saxophonist and composer Cameron Pffifner. In 2000 Tim joined forces with young alto saxophonist Aram Shelton and bassist Jason Ajemian to form Dragons 1976, and continues to record and tour with this group to this day. Tim joined the Vandermark Five in 2001 and has been an integral member of the band since that time. During this period he also ran the Thursday night improvised music series at The Nervous Center in Chicago. Other active projects include Bridge 61, the Dave Rempis Quartet, Kyle Bruckman’s Wrack, and his own Festival Quartet; past collaborations have included work with the Chicago Improvisers Group, Sound In Action Trio, Unclocked, Arrive, Scott Rosenberg’s Red, and Fred Lonberg-Holm’s Lightbox Orchestra. In November, 2003, Tim was selected as one of “Thirteen Drummers For The Future” by Downbeat Magazine.

For more info check out timdaisy.wordpress.com

“… the improvised pieces are easily mistaken for thoroughly composed music. The sound is coherent, coordinated and is what we might dub Chicago organic. …”
Allaboutjazz review of Converging Tributaries” 2017

“… Much in that way a storm cloud has no definite borders or concrete shape, yet possesses a presence that implies depth (and more), the quartet of guitarist Dan Phillips, trombonist Jeb Bishop, double bassist Krzysztof Pabian and drummer Timothy Daisy rain down with plenty of free jazz improvisation, but by coalescing into the occasional groove, they provide a sense of focus and direction to music that doesn’t always move that way…”
“Bird is the Worm review of Converging Tributaries” 2017

“… Phillips and company play with confidence. None are in a hurry to achieve any notable goal other than to add their own contributions to those of the rest of the group. Thus move seamlessly between order and chaos, with varying tone and dynamics. …”
Allaboutjazz review of Converging Tributaries” 2017

“… Chicago Edge Ensemble is an all-terrain vehicle, a quintet equally capable of negotiating the bumpity-smooth contours of swinging postbop, the banked hairpin turns of fusion-funk, the fog and ether of AACM-style intrigue and the tumultuous thicket that awaits if you gleefully careen off the road. …”
Review of Chicago Edge Ensemble Decaying Orbit Jazz Times 2017

“… Phillips in particular proves why he’s the most under-appreciated electric guitarist from the Chicago area. There’s no hesitation or sense of compromise on Decaying Orbit. As the band name implies, this is jazz and improvisational material which goes to the edge, stays there, and doesn’t retreat. …”
Review of Chicago Edge Ensemble Decaying Orbit Audiophile Audition 2017

“… Chicago jazz is the complexity of the postmodern with a predisposition for rump shaking. The Quintet rarely lowers the flame below boiling…”
Review allaboutjazz 2017

“… one of the most original guitarists and composers currently on the jazz scene… ”.
Review allaboutjazz.com 2010

“… he [Phillips] opens the vista in a swell of notes that cut, roll and sweep ahead in a near torrent… the textures weave and bob, taking flight on the wings of their imagination… ”
Review of Dan Phillips Trio “A Moment of Clarity”  allaboutjazz.com 1/2005

“Phillips provides lush and full chord voicings in just the right places, and solos effortlessly. His tone is clean and traditional while his improvised lines are much more in the free jazz genre in their direction. Dan Phillips is an interesting player who blends a modern and free approach with a more mainstream tone.”
Review of “Bangkok Edge” Vince Lewis Guitar International 2013

“Phillips innovative and improvisational mindset is still held together with the glue that is his strict belief in melody. He seems to know, without hesitation, when to break free of the textbook, yet recovers back to the basic principles of arrangement and composition. As a fine navigator, Phillips sets his compass by pure gut instinct, a refreshing trait of a leader!” “Rising above the nauseam of the traditionally bland attempts from others in the past, Phillips always seems, in all his work, to strive and succeed in keeping the sound fresh and expressive in feel and style.”
Review of "Bangkok Edge" Karl Strober Cadence Magazine July 2013

"When Phillips cuts loose he's as exciting a guitarist as there is, though he never abandons melody. He gets under the skin of the composer and inhabits a tune, reworking it in his own idiom. And as his originals here and on his previous albums as leader demonstrate, he creates pretty high standards of his own design."
Review of "Bangkok Edge", allaboutjazz.com, 2012

“Phillips is, without question, a skilled guitarist. His playing is fluid and understated, but he’s not above progressing through lengthy jams and pushing things to their limits. He solos deeply rather than broadly, tunnelling in to find the consistency of the notes and probing their meaning with sleek flourishes and impactful holds.”
Review of "Bangkok Edge, Canadian Audiophile, 2012

“Phillips in particular stands out for his fluid, whimsical articulations that’s alternately fleet-fingered and thoughtful, but always fresh and not clichéd. Phillips, as is made clear on this song, is one of those “looks hard, sounds effortless” type of guitar players. “
Review of "Bangkok Edge, Something Else Reviews, 2012