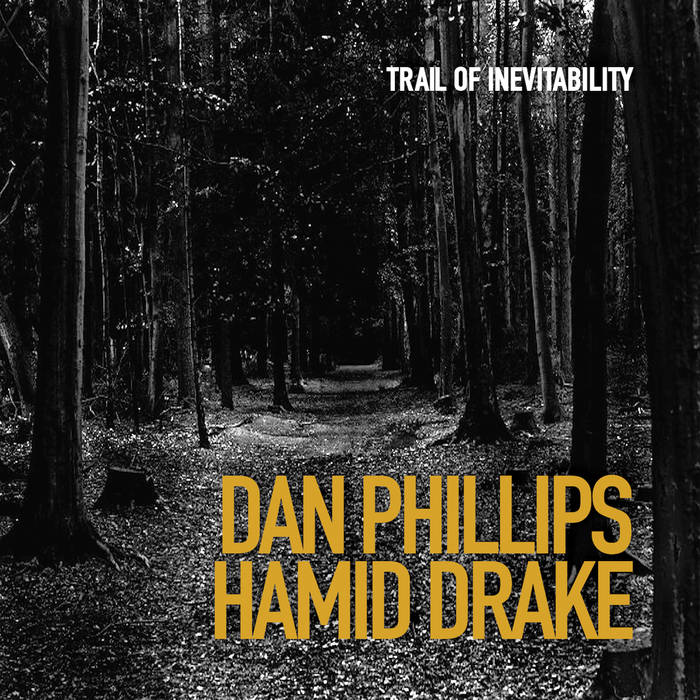 
The first release from this Chicago based duo featuring six collaborative compositions/improvisations by guitarist Dan Phillips and percussionist Hamid Drake.


Although this is the first release for this unique duo, Dan and Hamid have performed together in Hamid’s Solstice Quartet and “Chicago Edge Ensemble” which released it’s first recording ”Decaying Orbit” in 2017 and its second release “Insidious Anthem” will be forthcoming on Trost records September 2018.

The album features the unique compositional/improvisational style of Dan and Hamid.

Chicago has justly earned its high esteem amongst jazz & creative music aficionados. The city that fostered the talents of the AACM, Sun Ra, Fred Anderson, and many more has been kept alive by figures such as Ken Vandermark, Dave Rempis, Michael Zerang, Tortoise and many more.


The album begins with the title track “Trail of Inevitability” which is an extended improvisation journeying through various shapes and moods. This is followed by “Forked Tongue”, a more aggressive and intense open shaped improvisation with liquid guitar lines and Hamid’s powerful interactive drumming. “Inside Voice” starts very abstract and fragmented before soaring toward deep groove clear melodic statements. “Imminent Recline” features a minimalist guitar loop that Dan and Hamid deconstruct rhythmically and melodically. “Excursion” is a short groove based statement that culminates in an improvised repeated melodic phrase. “Afternoon Ambush” is the most intense and open improvisation on the recording reminiscent of Saxophone and Drums duos, but uniquely Dan and Hamid.


What critics have said about Dan Phillips’ previous work:


“Chicago Edge Ensemble is an all-terrain vehicle, a quintet equally capable of negotiating the bumpity-smooth contours of swinging postbop, the banked hairpin turns of fusion-funk, the fog and ether of AACM-style intrigue and the tumultuous thicket that awaits if you gleefully careen off the road.” Review of Chicago Edge Ensemble Decaying Orbit Jazz Times 2017

“Phillips in particular proves why he’s the most under-appreciated electric guitarist from the Chicago area. There’s no hesitation or sense of compromise on Decaying Orbit. As the band name implies, this is jazz and improvisational material which goes to the edge, stays there, and doesn’t retreat.” Review of Chicago Edge Ensemble Decaying Orbit Audiophile Audition 2017

“With its palpable personality, rigorous but approachable compositions, and sure-footed sense of self, Chicago Edge Ensemble's Decaying Orbit not only pays homage to the city that Phillips loves, but also solidly places him on the map as a formidable instrumentalist and composer. It's a treat to hear him play with such a first rate band of some of Chicago - and the world's - greatest musicians.” Review of Chicago Edge Ensemble Decaying Orbit Broadway World 2017

“Chicago jazz is the complexity of the postmodern with a predisposition for rump shaking. The Quintet rarely lowers the flame below boiling.” Review of Chicago Edge Ensemble Decaying Orbit allaboutjazz 2017


“With each release Phillips’ sound continues to mature and expand. What remains unchanged is his imaginative creativity and his restless inventiveness. These and his shared musical vision with his sidemen—accomplished artists in their own rights—are what make this recording an absorbing musical treat.” Review of Dan Phillips Trio “Divergent Flow” Chicago Jazz Magazine 2018


“the improvised pieces are easily mistaken for thoroughly composed music. The sound is coherent, coordinated and is what we might dub Chicago organic.” Allaboutjazz review of Converging Tributaries” 2017

“Much in that way a storm cloud has no definite borders or concrete shape, yet possesses a presence that implies depth (and more), the quartet of guitarist Dan Phillips, trombonist Jeb Bishop, double bassist Krzysztof Pabian and drummer Timothy Daisy rain down with plenty of free jazz improvisation, but by coalescing into the occasional groove, they provide a sense of focus and direction to music that doesn’t always move that way” “Bird is the Worm review of Converging Tributaries” 2017


“Phillips and company play with confidence. None are in a hurry to achieve any notable goal other than to add their own contributions to those of the rest of the group. Thus move seamlessly between order and chaos, with varying tone and dynamics.” Allaboutjazz review of Converging Tributaries” 2017

Hamid Drake (born August 3, 1955) is an American jazz drummer and percussionist.
By the close of the 1990s, Hamid Drake was widely regarded as one of the best percussionists in jazz and improvised music. Incorporating Afro-Cuban, Indian, and African percussion instruments and influence, in addition to using the standard trap set, Drake has collaborated extensively with top free jazz improvisers. Drake also has performed world music; by the late 1970s, he was a member of Foday Musa Suso's Mandingo Griot Society[1] and has played reggae throughout his career.[2]
Drake has worked with trumpeter Don Cherry, pianist Herbie Hancock, saxophonists Pharoah Sanders, Fred Anderson, Archie Shepp and David Murray and bassists Reggie Workman and William Parker (in a large number of lineups)
He studied drums extensively, including eastern and Caribbean styles. He frequently plays without sticks, using his hands to develop subtle commanding undertones. His tabla playing is notable for his subtlety and flair. Drake's questing nature and his interest in Caribbean percussion led to a deep involvement with reggae.


Dan Phillips is an American guitarist, composer educator and band leader who has worked professionally in New York, Chicago, Bangkok and Tokyo. His Chicago based Trio has released three original recordings “Journey in Mind”, “Moment of Clarity” and “Destination Unknown”. His Bangkok Quartet has two releases “Bangkok Edge” and “Bangkok Edge Live” he also produced an educational/ concert DVD “Jazz Guitar Basics and Beyond”. He is also the leader of the “Chicago Edge Ensemble” which just released its first album “Decaying Orbit” featuring Chicago greats Hamid Drake, Jeb Bishop and Mars Williams. He has appeared at the Montreal Jazz Festival in Canada, Copenhagen Jazz Festival in Denmark, Ashikaga City Jazz Festival in Japan,Pattaya Music Festival, Bangkok Jazz Festival, Chiang Mai Jazz Festival and Hua Hin Jazz Festivals in Thailand, and All Souls Jazz and Empty Bottle Jazz Festivals in Chicago. Dan has also presented Jazz workshops throughout Asia, Europe and The U. S. He is currently Lecturer of Guitar and Jazz Studies at Silapakorn University in Bangkok, Thailand. He completed his undergraduate studies at Berklee College of Music where he was selected to represent the college at the Montreal Jazz Festival in his senior year in the “Berklee All Star” ensemble. He completed his graduate studies at Northwestern, University. Dan has performed with jazz musicians such as Gerald Wilson, Danilo Pérez, Judy Roberts, Hugo Rasmussen, Jeff Parker, John Stowell, Matt Darriau, JimBlack, Hamid Drake, Jeb Bishop, Mars Williams, Ben Street, Chris Speed, Pat Zimmerly, Mike Sarin and Ed Thigpen and many more.
For more info check out www.danphillipsmusic.com or www.facebook.com/danphillipsguitarist/

Mixed and Mastered by
Krzysztof Pabian at Oknomedia